The horse family (Equidae) first appears in the fossil record during the Eocene, approximately  55 millions of years ago. Sifrhippus sandrae (also known as Eohippus pernix or Hyracotherium sandrae) was the size of a dog and browsed for food in the humid forests of North America. His five toes spread out in order to tread on humid soft soils and his teeth were made to eat leaves,

When temperatures fell during the Miocene, about 20 million of years ago, part of the forests turned into steppes. This new habitat gave new opportunities for new species of equids to develop.  Larger species appeared, who supported themselves on one toe and had teeth that could eat grasses. One example is Dinohippus, who lived 10 million years ago and is seen as a precursor of the modern horses of the genus Equus.

An analysis of the genome of fossil and modern equids, done in 2013, indicates that the common  ancestor of the genus Equus (horse, przewalski, zebra e asses) lived some  4-5 million of year ago, during the Pliocene, in North America.

In those times, species of Equus migrated over the Bering Strait to Asia, Europa e Africa and over the Isthmus of Panama to  South America.  The equids of the Americas went extinct, probably through a combination of climate change and hunting by humans. The last fossils from the Americas date back to  8- 12 thousand years ago.

In Africa the equids evolved into Zebras (3 species) and the African Ass (donkey). In Asia they developed into true horses (Equus caballus and Equus przewalski) and two species of Ass, the Kiang and the Onager. Horses also reached Europe and the wild horse of Europe is usually called Tarpan.  The Tarpan is the horse we see in the cave paintings from 20-30 thousand years ago and is considered an ancestor of the modern horse.  The Tarpan probably went extinct in the 19th century, due to a combination of cross-breeding with domestic horses and hunting. 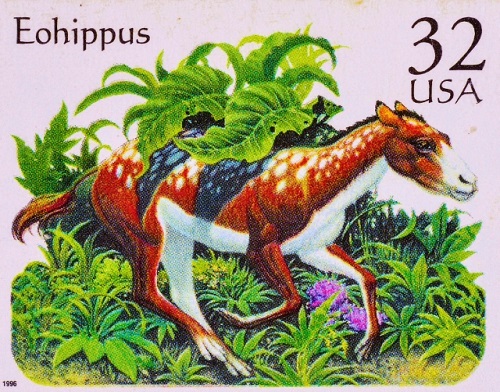 The "Dawn Horse" on a stamp from the IHOCA collection

We know from cave paintings, petroglyphs and fossil remains that prehistoric horses were intensely hunted. In the Americas they probably went extinct because of this. Why didn´t this happen in Eurasia?

In reality, the horse nearly went extinct there as well, but was saved because humans discovered they could train and domesticate the horses.  Where and when this happened is still under discussion. Domestication goes further than training wild animals to live with humans. Domestication implies that through selected breeding, the species is adapted to human needs.

One of the first places where the is evidence of horses and humans living together is Krasni Yar in northern Khazakstan. There remains of horses, corrals and the use of horse products were found from 3.500 - 3.000 anos B.C linked to the Botai culture. Others point to the Plains of Kuban between the Black Sea and the Caspian Sea, In Khvalynsk (Russia) bones of sacrificed horses together with those of domesticated animals were found and in  Maykop (Russia), apart from bones, paintings of horses were found in a Kurgan (a typical tomb of the region). 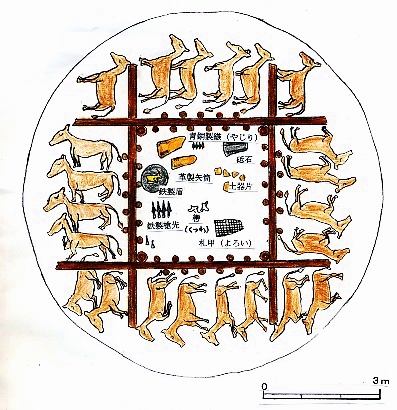 Initially, horses were probably mounted to facilitate herding. But the homo-caballus partnership, with the aid of other technologies helped  "equestrian culture" develop rapidly over the steppes of Eurasia and other regions.

Horse domestication coincides with the appearance of the wheel. The hub-and-spoke wheel was invented around 2200 B.C. and was used for the war chariot, where one person controls the horses and others can shoot with bow and arrow.  One of the first surviving images is that of the  Sumerians (Southern Mesopotamia). Tombs with horses and chariots from the Sintashta culture (frontier of Russia with Khazakstan) have also been found.

The use of bow and arrow is older (10.000 B.C), but it was the invention of the composite bow  (2000 BC), that permitted more potent and smaller bows, which meant they could be used while riding a horse. With the  invention of the saddle, the stirrup and the bridle and also of  equitation, the steppe nomads became powerful invasive forces in  Europa, Asia and North Africa.

The Scyths were one of the first peoples to dominate the steppes through  mounted archery warfare. They surged from 900 B.C in Southern Siberia and at the peak of their power controlled an area from the Carpathian Mountains to Western China. Their battles with the Greeks, Assyrians and Persians are famous.

Their great tombs or Kurgans are still spread out over the steppes.,Those that were excavated show their rich culture and art and their intimate connection to their horses, who were buried with them. The permafrost helped to preserve the men and women, their clothing, their weapons, their jewelry, horses and horse tack. The equestrian material indicates they were excellent horsemen and women and that they didn't need harsh bits to control their horses.

Altai Mountians, where many tombs have been found (Bengt Janér)

DNA analysis taken from the remains of horses in Sintashta and Scythian tombs reveals that these people were breeding horses and selecting for color, speed, gaits, stamina and, probably, for a docile temperament.  In these times there was still good genetic diversity of the stallions.

A recent study shows that continued selection has now eliminated this variety. Nearly all stallions have an Y chromosome that descends from two lineages of oriental horses (Turk or Arab). Only breeds like the Fjord, Icelandic Horse and Shetland descend from different lineages.

If you want to learn more about equestrian history and culture, read Bjarke Rink's books or do the Centaur Legacy course.